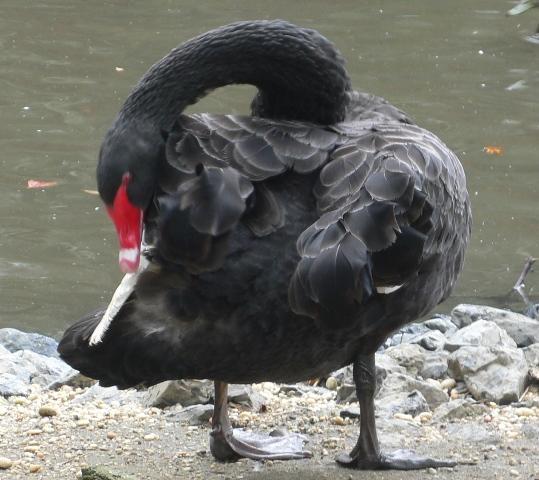 Habitat and Range: Wetlands throughout Australia (both fresh and salt) and were introduced into New Zealand in 1864.

Captive/wild Lifespan: Up to 40 years in captivity, wild unknown

Incubation: Black Swans are monogamous and have sometimes been known to never pair bond again if a mate passes away. In very rare instances they will get "divorced" but this is only seen if the pair is unsuccessful in producing young. Once the eggs are fertilized and laid it's around 42 days before they hatch.

Adaptations: Long necks that allow them to reach food inaccessible to other waterfowl; and the ability to stay submerged for 10 seconds while searching for food. Also a rough tongue aids them in grabbing slippery plants. These graceful swimmers can weigh up to 20 pounds and their neck is longer then there bodies sometimes reaching length of 5 feet.

Conservation: There is currently no conservation plans in action due to numbers not being threatened.

Here at the CMC Zoo: Our 4 Black Swans were all a private donation and came to us in 2010. We currently have 2 females, 1 male, and 1 with an unknown sex.