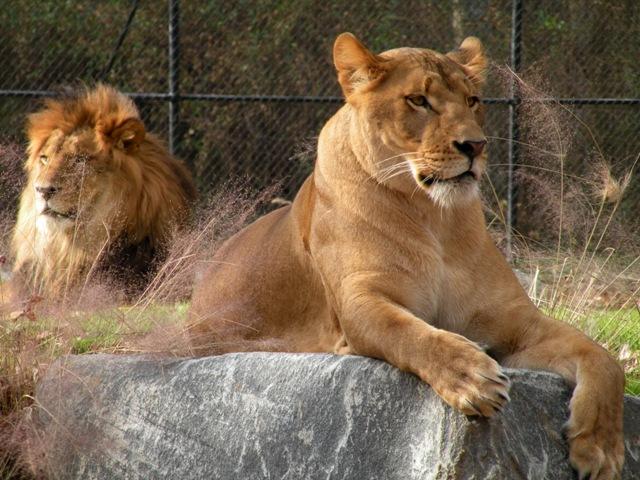 Habitat and Range: Grassy plains from the Sahara to southern Africa; excluding the rainforest belt.

Adaptations: The winding down roar is a lion's way of long-range communication. The roar will last around 20 roars and each one is a lower pitch than the previous one. This sound can be heard nearly 6 miles. This roar is the loudest of any cats.

Conservation: In Africa, Lions are present in a number of large and well-managed protected areas and remain one of the most popular animals on the must-see lists of tourists. Because Lions generate a significant cash revenue for both park management and local communities a strong incentive for lion conservation is in place. Efforts include educating, reducing lion-human conflict, increasing habitat and insuring a wild prey base.

Did you Know: Lions are the only social exotic cat that live in groups called prides. All other cats prefer a solitary life. Just like a house cat, lions can sleep around 20 hours a day. Until 10,000 years ago lions were the second widest dispersed mammal in the world (second to humans), and could be found in North America.

Here at the CMC Zoo: Our African Lions came to us in November of 2014 from Jacksonville NJ. Our Male Lex and female Bella are siblings born in 2011. Their main keeper enjoys working with them and compares them to big dogs.