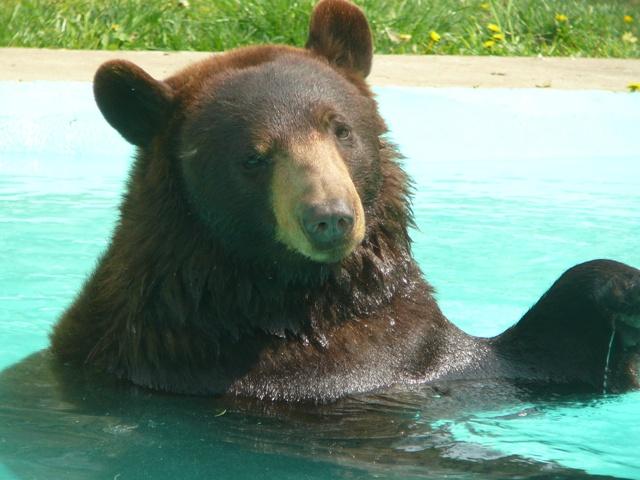 Habitat and Range: Deciduous, Coniferous and open Alpine forests from Alaska, Canada, and the United States.

Captive/wild lifespan: Upwards of 25 Years in captivity, and average 10-15 years in the wild

Gestation: 1-6 cubs are born at the end of winter after 7 months and stay with mom for at least 2 years.

Diet: Omnivore– 95% is plant-based (fruits, nuts, grasses) although they do eat, fish, rodents and carrion

Adaptations: Males and females differ greatly in size with males reaching upwards of 600 pounds, females rarely pass 250 pounds. Despite the name black bear, they come in a variety of colors such as black, brown, silver or "glacier grey" and even white. The white black bears are often refered to as spirit bears and are revered by Native Americans. Black bears live a solitary life, only coming together for breeding or if a mother bear is raising cubs. Not all Black Bears hibernate, it depends on the region in which they live.

Conservation: Black Bears are not protected but hunting of these animals is well controlled. There biggest threat is habitat loss and conflicts with humans due to living in the same habitat. There are many education opportunities and even resources available to people living within bear habitats to help reduce conflicts.

Did you know: Black bears lack the shoulder hump seen on Grizzly Bears– and since their ranges over lap this is a quick way to visually distinguish between the two.

Here at the CMC Zoo: We have two Black Bears that call our zoo home, Roxy and Cody. They are brother and sister that came to us in 2005 as a private donation; they were born on June 9, 2004.