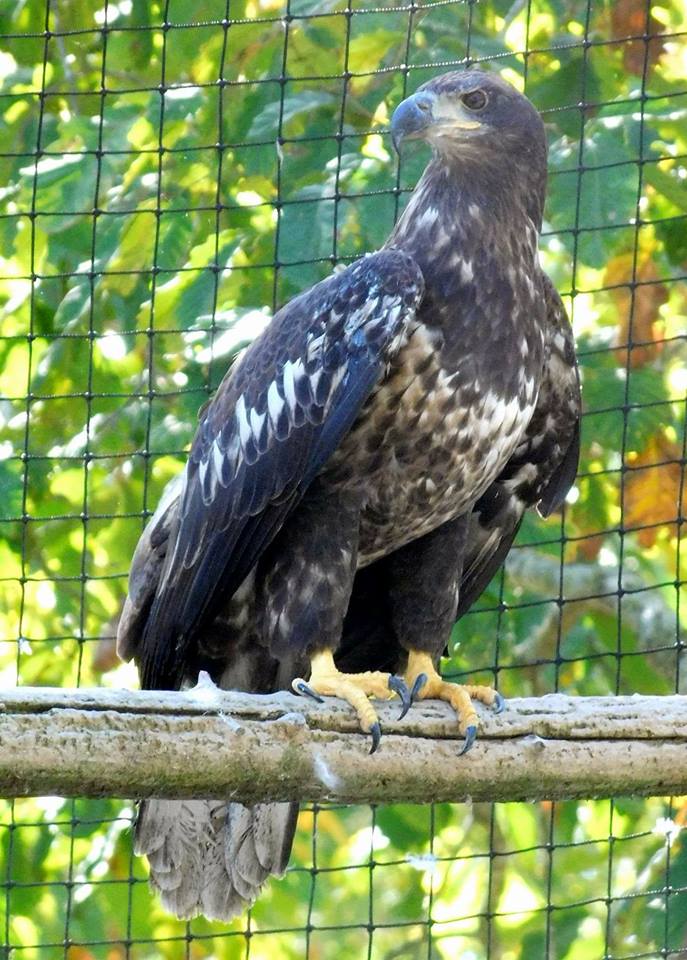 Captive/ Wild Lifespan: Average lifespan in the wild consists of around 20 years with 28 being the oldest on record. In captivity the average lifespan is around 40 with one individual in up state New York living to be 50 years old.

Gestation: Sexual maturity is reached around 5 years of age, once reached they often return to the area they were hatched to look for a mate. Bald Eagles do breed for life however, if one of the mated pairs dies or they repeatedly have failed attempts on successful hatching they will look for a new mate. Laying 1-3 eggs it takes about 35 days for them to hatch.

Diet: An opportunistic Carvivoire, with fish being the primary staple they will also take small mammals and smaller birds.

Adaptations: Raptor or Bird of Prey, with a wingspan of 5-7 feet they can weigh 7-12 pounds. Females on average are 25% larger then males but both have identical plumage.

Conservation: The Bald Eagle was first protected in the U.S and Canada by the 1918 Migratory Bird Treaty, by 1940 the protection expanded the whole North American continent and they had received their own Protection Act (The Bald Eagle Protection Act). This protected them from both commercial and private trapping and hunting. Despite the efforts, by 1962 they were placed on the Endangered Species List. 1972, the most significant step towards the survival of these birds was taken when the ban of DDT ( A pesticide) was placed. It was discovered that the chemical affected the Calcium produced by the adult birds creating brittle eggs. The eggs were not able to withstand the weight of the adult birds and crushed or cracked. Today they have been removed off the Endangered Species list and are still on a steady increase in population.

Did you know: Bald Eagles are not really "Bald" but the name derives from and older meaning of  "white headed". Believe it or not they're laws protecting not just the Bald Eagle, but their feathers as well. The law stipulates that only individuals of certifiable Native American ancestry enrolled in a federally recognized tribe are legally authorized to obtain or posses Bald or Golden Eagle feathers for religious or spiritual uses.

Here at the CMC Zoo: This young male Bald Eagle joined our team in the Fall of 2017. He had a tough start in life, people didn't think he would make it, but he had resiliency, and he was a fighter. We think this is the perfect name for him...

Say Hello to "Foles" next time you visit.

Congratulations to the 2018 Superbowl Champion Philadelphia Eagles! — with Foles