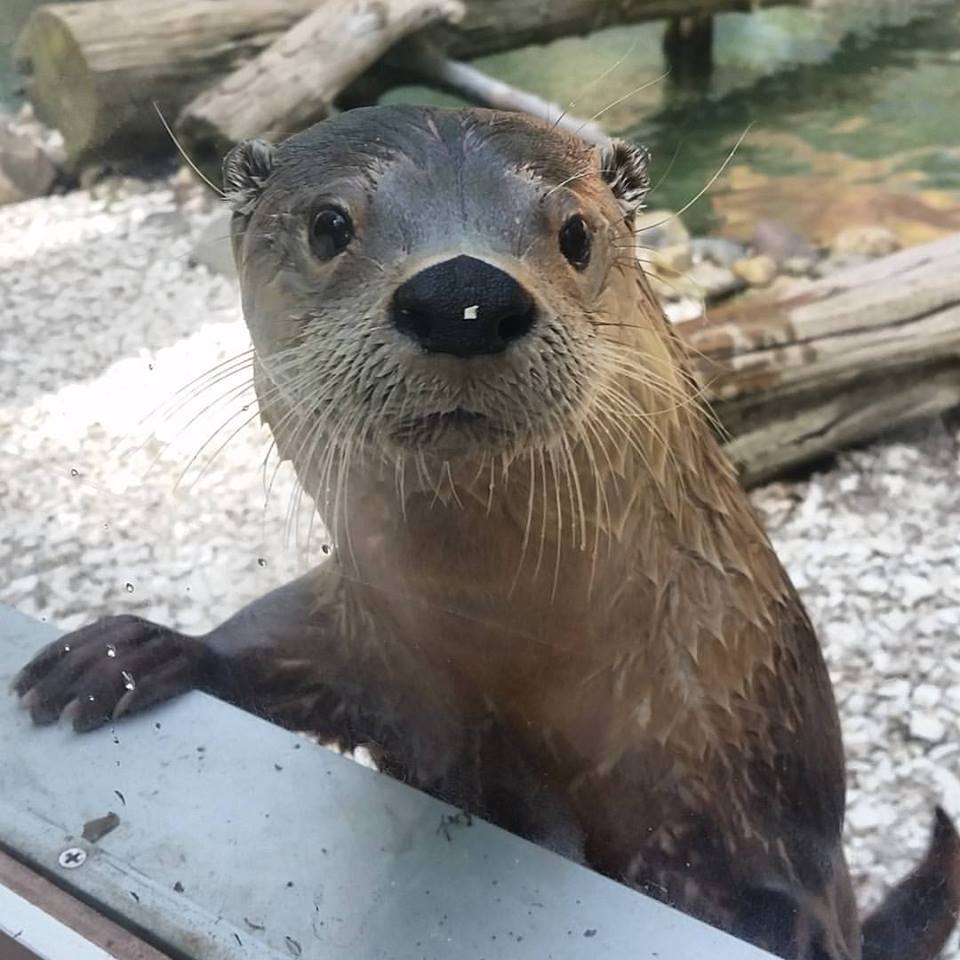 Habitat and Range: Throughout Canada and northern United Stated down through the east coast to Florida. They prefer bog lakes with banked shores containing semi aquatic mammal burrows and lakes with Beaver lodges. Despite their name "River Otter" they are found in both fresh and salt water environments.

Captive/wild lifespan: Up to 13 years in the wild, but up to 25 years in captivity.

Gestation: Both males and females are sexually mature around 2 years of age and breed from December to April and only have one litter per year. Unlike the European River Otter, females can delay implantation for up to 8 months if a den cannot be found or the weather conditions create a poor environment. Gestation lasts 61-63 days with 2-4 pups born.

Adaptations: Female River Otters can weigh up to 18 pounds while the males can come in a whopping 25 pounds. They are well equipped for aquatic life with a long body, short limbs and a broad flat tail that takes up 1/3 of its entire body length. They can stay under water for 6-8 minutes at a time and dive up to 20 feet to forage for food.

Conservation: North American River Otter numbers have declined due to habitat loss, pesticide use, and trapping for their coats. Thanks to nationwide efforts to reduce pollution in water ways Otters have been reintroduced to some of their former habitats.

Did you know: They have the densest coat of and mammal with 85,000 hairs per square inch. It is made up of two types of fur with a soft down like under coat for warmth and thicker water proof guard hairs on the top. They are the only true amphibious member of the weasel family and even make water slides on steep river banks for fun. There are several differences between Sea Otters and River Otters, including their swimming styles. Contrary to popular belief that all otters hold hands while in the water, only Sea Otters hold hands and swim belly up with most of their body out of the water. River Otters are almost completely submerged and swim with their back up. River Otters sleep exclusively on land while the Sea Otter sleeps in the water in short bursts, this is where the hand holding comes in to keep them from drifting apart while sleeping.

Here at the CMC Zoo: We now have 2 North American River Otters, one male and one female. Our Female Annie was born in 2003 and came from North Dakota. Her keepers say she is very sweet and shifts well for them. Our male Mork was born in 2009 and come from Omaha. His keepers say for the most part he is well-behaved and affectionate but does occasionally throw temper tantrums (as the keepers call it) when its time to shift. He yells loudly and refuses to leave the shift tunnel until he is ready to.