Dedication
The Cape May County Veterans’ Cemetery was 1st dedicated in 1980 and has been serving as the final resting place for county Veterans’ for nearly 35 years. When the 17.6 acre cemetery was officially opened it was the 2nd burial site for veterans in the state and 1 of 2 counties in the nation with a local cemetery for its veterans. The location for the Veterans’ Cemetery, in the Crest Haven Complex, was selected since it was a large enough parcel of county owned land and fit within the land use parameters regulated by its proximity to a navigational facility.
Freeholder's Greatest Accomplishment
Freeholder Gerald M. Thornton, a U.S. Air Force Veteran himself, met with local veterans who requested a Veterans’ Cemetery in the county because the nearest federal veterans burial sites were located in Long Island and western Pennsylvania. Myrtle Hevener, Veterans’ Service Officer and Supervisor of Veterans’ Interment, when the cemetery plan was announced, reported there were 8,500 county veterans and their spouses who would have access to free burial plots.

In 1977, Freeholder Gerald M. Thornton, liaison of Health, Welfare and Charities, worked with local Veterans and proposed the use of the county owned land to the Board of Chosen Freeholders who voted unanimously to move forward on the project. Thornton worked to secure waivers and permits from the state to begin development of the Veterans Cemetery. Members from every Veteran’s Organization in the county came together to support and take part in the planning of the cemetery.

In May 1980, history was made and the Cape May County Veterans’ Cemetery was opened with room for 6,300 grave sites. Since then a section for the burial of cremains has been opened to allow for 6,700 veterans to be interred with honor among fellow veterans.

Veterans' Monument
The 10-foot granite monument, inscribed with the insignias of all branches of the armed forces and carved with the words, “For Your Tomorrow, We Gave Our Today,” was unveiled before a crowd of proud veterans wearing campaign hats from every branch of the military, including 81 year old Ernest Smith, who was dressed in his original dough boy uniform from World War I. 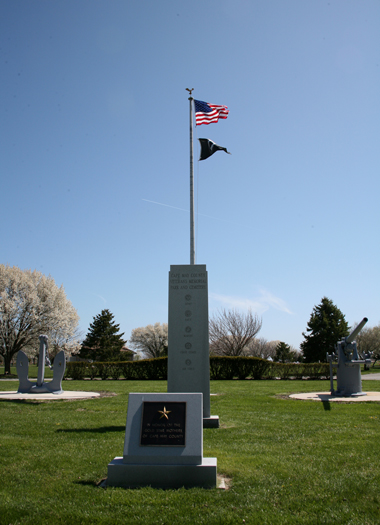 The monument was paid with donations from private individuals, businesses and veterans organizations and cost $4,266. The Veterans’ Monument stands as a tribute to honor and welcome, to their final resting place, all Cape May County Veterans who honorably served their country.