County records indicate that the first mention of the county seal was on February 6, 1838, when the Board of County Commissioners asked Jeremiah Leaming to make a seal for the county. There is no description of what type of seal it was or what it looked like. A county seal was not mentioned again in records until May 7, 1872, when the Director of the Board of Commissioners, Dr. Alexander Young, suggested that a new county seal be made as the old one was poorly made and should be destroyed. There was no description given of the appearance of this seal either. 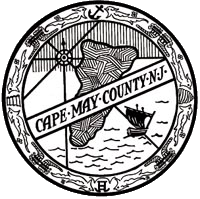 On March 16, 1927, Commissioner Director Joseph G. Champion presented a design for an official county seal to the Board of Freeholders. The design had been made by architects Edwards and Green of Philadelphia. Champion wished to have the design installed in the floor of the new court house building on Main Street in Cape May Court House. The design was accepted and on May 1, 1927, this design became the official seal of Cape May County.

The boat is believed to represent the Half Moon, the ship of Henry Hudson, who discovered the cape and claimed it for the Dutch. The compass arrow indicates the position of the county. The symbols around the edge represent fish or whales which, along with the anchor, represent the county’s maritime commerce. The bee hive on the right is thought to represent county industry. The stack of books on the left represents learning or education. The cornucopia between the fish represents the agricultural bounty of the county. The last symbol at the bottom of the seal is a mystery symbol. No one seems to know what this symbol stands for.
Interactive Map
Employment Opportunities
Notify Me™
Emergency Management
Form Center
Facilities & Reservations
Explore Us
Bid Postings